Best places to visit in Venice

It’s difficult to know where to begin in a city as densely packed with tourist attractions as Venice. The ideal method is to simply get lost for a few hours meandering around its charming small alleyways and passages. Meandering beside its canals, and discovering its hidden gems.

At every step, you’ll come across something worth photographing. It’s simple to go back to Piazza San Marco and the Grand Canal no matter where your journey leads you. The majority of the great sites to see are located near these two locations.

Best places to visit in Venice

Piazza San Marco (St. Mark’s Square): St. Mark’s Basilica (Basilica di San Marco). It is unquestionably Venice’s most well-known cathedral and one of the most easily recognizable in the world. It was once the Doge’s private chapel, embellished with Byzantine art treasures carried back by Venetian ships after the fall of Constantinople.

Palazzo Ducale (Doge’s Palace): Visitors arriving in Venice used to alight underneath the magnificent façade of this magnificent mansion. They couldn’t help but be awestruck, both by its magnitude and the elegance with which it was built.

Canale Grande (Grand Canal): The Grand Canal, which runs through the heart of Venice in a large reverse S curve. It is the city’s primary thoroughfare. Linking Piazza San Marco, Rialto Bridge, and the mainland rail station and bridge arrival sites. 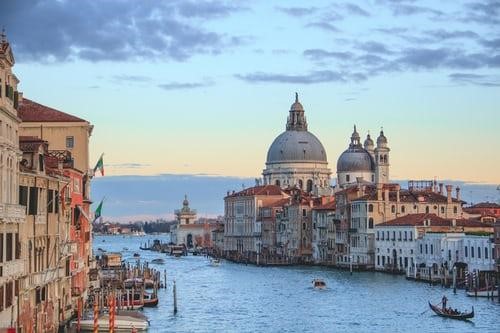 Scuola Grande di San Rocco: Between 1515 and 1560, the magnificent white marble structure was constructed. Tintoretto, the famous 16th-century Venetian artist, Won the competition to paint a central panel for the ceiling of the Sala dell’Albergo shortly after it was completed by entering the building and placing his picture in its designated location before the judging, much to the annoyance of his competing painters.

Ca’ d’Oro: Bartolomeo Bon’s exquisite marble filigree appears too lace-like to be carved of stone, and you can only imagine the impact this façade must have had when it was coated in its original paint and gold. This is regarded as the most ideal example of Venetian Gothic, together with the Porta della Carta at the Palazzo Ducale, which was also designed by Bartolomeo Bon.

Murano and Burano: A visit to Venice would be incomplete without taking a Vaporetto across the lagoon to Murano, the home of Venice’s legendary glass artisans. They were transported here in the 13th century in the hopes of reducing the risk of fire from one of Venice’s densely packed center’s glass furnaces.

Santa Maria Gloriosa dei Frari: The Franciscans started building this Gothic church in 1340 and finished it in the middle of the 15th century with the construction of the front, interior, and two chapels. It has the city’s second-highest campanile, built in the 14th century.

Gallerie dell’Accademia (Fine Arts Museum): This Grand Canal museum, known simply as “Accademia,” houses the world’s largest and most extensive collection of Venetian paintings from the 15th to the 18th centuries. The majority of the collection, which is presently on display in the old Monastery of Santa Maria della Carità, was gathered from shuttered monasteries and churches, as well as the cleaning of aristocratic families’ mansions.

Santa Maria dei Miracoli: Little Santa Maria dei Miracoli, a marvel of Early Renaissance architecture by Pietro Lombardo, is like a breath of fresh air after the great majesty of St. Mark’s and the towering sweep of Frari. This pastel inlaid marble jewel box was constructed between 1481 and 1489 to house a miraculous image of the Virgin.

Palazzo Rezzonico: Just as Ca’ d’Oro provides you a look into life in the late Middle Ages, Palazzo Rezzonico paints a vivid image of life in the 18th century throughout the Baroque and Rococo periods. The palace was designed and started by Venice’s maestro of Baroque architecture, Baldassare Longhena, and was completed over 100 years later by Giorgio Massari in 1750.

One of the most perplexing concerns for visitors to Italy is whether or not they require an International Driver’s Permit, sometimes known as an IDP. It’s a fair topic, and one we’ve pondered several times before embarking on trips to a variety of European nations.

While there are a few European countries that speak English and would accept a driver’s license from the United States. You should bear in mind that many others, like Italy, do not. And it is here that the international driving permit, in addition to your home country’s driver’s license, is legally necessary.

Driving in Italy is best done if you are ready to take it on as an adventure, spend some time looking at maps, accept being lost, and learn to manage traffic in a new way. The roads in Italy are excellent. Although highways and freeways are fantastic (and often constructed on magnificent mountain tunnels and viaducts), they are not always free. Click here for Villas in Italy

Best Places to Visit in Dubai with Friends

What Are The Different Types Of Floating Docks?